My life as an artist

John Philip Wagner, Artist – In his own words.

“I believe though born elsewhere, my origins are here in the Southwest. Some Native Americans think that many of the people who are drawn here have come simply because they belong here, that at one time they were here. To me, the sense of dust makes me feel at home.”

John Philip Wagner commits his unique mythohistory to canvas against the backdrop of the Southwest. He breathes into it what he likes to think of as a “Sense of Dust”. Dust itself depicts the style of the Southwest. ln dust are hidden the images of many eons past, the memory of lives and civilizations long gone.

lt embodies a feeling of time and perception. lt is something always around us, always with us. Yet we are not always aware of it. Dust hangs in air hazing the landscape, muting its colors.Then the rain comes, the dust disappears and the scene completely changes.

So it is with John’s paintings, the myths are elusive but the message is crystal clear.

My story begins when as a child I realized that I could travel through my imagination. I was groomed to be an artist by my mother, also an artist. Her father was a genius and an inventor of looms during the Industrial Revolution.

I was a child prodigy, plastering the walls of my elementary school with paintings where they remained for many years. In those days my travels were with Odysseus to the Island of Cyclops and the Iliad before it. I painted Roman galleons and the Pyramids of Egypt in the far off lands. All an escape from Philadelphia and the city where I lived.

Early on, I loved the American West and dreamt of being part of the historic frontier with the gigantic skies and vast open spaces.

As a teenager I built my first version of “The Wild West” with Saloon, Livery Stable, Blacksmith and Boarding House for HO Scale model Trains.

Later it all made sense when I planted my roots in New Mexico. In the late 1960’s Santa Fe stll had the flavor and the dust of a “Frontier Town”. In time, I bought adobe’s in the country and built my studio in El Rancho which is on the dirt road near San Ildefonso Pueblo. During this period I was painting a series exploring the creation myths of the “Ancient Ones”.

I made friends with people, also on a “Spirit Path”. Medicine men taught me without revealing the most secret things. The rest I picked up through friendships with “Holy Men” and the Elderly Elders like “Grandpa David”, David Monongye. I was given a copy of the teachings, history, and prophecies of the Hopi people, as told by Dan Katchongva which addresses many of the critical issues we face today. My paintings are a reminder of how things were, or seemed to be in the historic past. Some of which I am old enough to remember.

My home is now in Southern Colorado which is much like New Mexico with sage, Cottonwoods and cactus, the sky is enormous and dramatic.

I love the smell and sense of dust.

Please use our Quick Contact Form below for inquiries and questions. 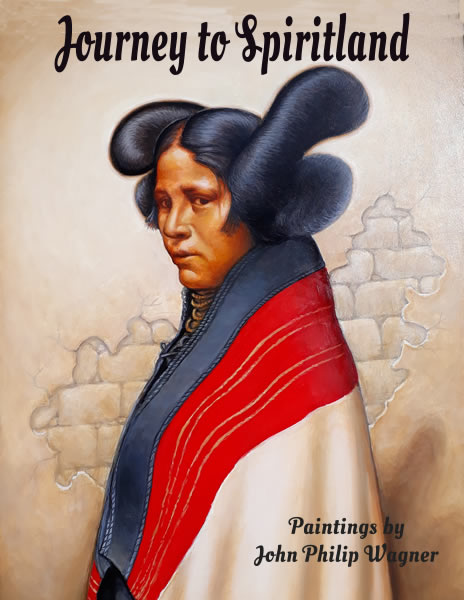 We hope you have enjoyed your Journey. Interested in learning more and staying updated on new works and publications with occasional emails, Join our mailing list by filling out the form below.

Please use our quick contact form below to inquire about purchasing John Philip Wagner's art or prints.